John Craggs: The pain I had prevented me from leading a comfortable life really. I was just in permanent discomfort really and it was just this ongoing problem that I was in deep discomfort all the time basically. I sort treatment to try and sort it out basically because it was just so uncomfortable all the time. I couldn’t do the sport I really wanted to do I couldn’t work out properly and now it’s unrecognizable. I’m thirty-two now and I was twenty-five when I started coming and my back has not been as good since I was probably seventeen, so that’s good to be good.

Craig Richardson: From walking through the door and the approach in everything is very professional. Very relaxed and even the way Jason would come in greet you and get you in an explain what’s going to happen, rather than just what I thought would be lying you on a bed, taking your top off and then doing some kind of massage on you. It’s that explanation of what’s actually going to go on so that you feel comfortable from the outset.

Pam Tweddle: Things really improved I could see a difference after my first treatment actually. I felt as if I could move a lot better and then after quite a few treatments I felt as if the pain was a lot better I didn’t have to take as much medication, and that was just after three of four treatments. I felt as if my life was back again.

Kate Stafford: It just started to drag me down because it was just an ache that was there all the time. I was fed up of it, I was fed up of it and I needed to go to the cause of the problem not just dealing with the symptoms. Been pain free has allowed me to do a lot more things particularly sports which I’m interested in. I’ve re-joined the gym because I’m able to participate without having any pain now.

Sofia Apreda: Well I did go to the doctor but I didn’t get much help I got given painkillers. So I didn’t have a choice I needed to get back to work and I needed help. I’ve had many treatments from Jason, I’ve had lots of great massage from Bron and I’ve had some good rehab with Kirsty. They are lovely people a great team. They are there to help you and you can see that by the time and effort they put into their work, it shows.

Gerald Hunt: I find them all very helpful and the treatment is very good, they are very sociable. We always have good discussions when I’m here. Interesting discussions and its quite an enjoyable process coming here.

John Craggs: I’d recommend Vitaphysical mostly because of the excellent standard of treatment I’ve had here and because it’s a generally pleasant place to come and get treatment.

Melanie Chapman: The reason I’d recommend to other people is that I’ve had a fantastic experience here. I only had a few treatments and from that few treatments I was already feeling so much better. The pain was going, it was great.

Alan Charlesworth: To other people I would say get treatment as soon as you can. I tended to put my treatment off for such a long time thinking well this is it Alan this is the way of life your back is going to hurt, it’s not that way. You need to address it sooner rather than later and the doctor will probably tell you that sooner the treatment the better it is anyway.

We are easy to find… 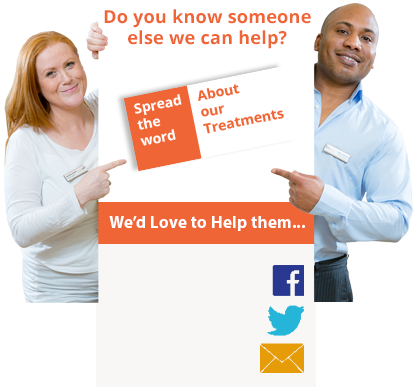